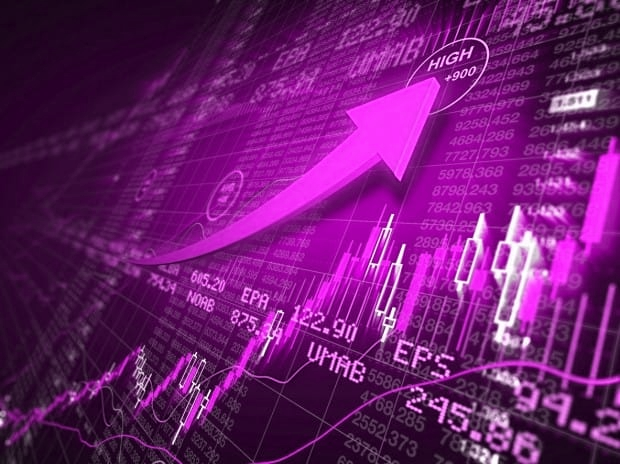 The push above a lower resistance level at 2675 unleashed all this near-term buoyancy. Suddenly, news is hopeful and all is rosy. But are we out of the woods here or is this but a bear market bounce? Let’s look at some evidence. It will be a bit more Elliott-ish than it should be for what we’re trying to do in these pages but I want everybody to understand realistically what our options are and Elliott is unique in providing perspective.

I will begin by saying this. In the S&P 500, it is possible to read into the whole pattern from the 2018 peak as being a triangle because the move to a limited new high into SEP can be part of a bullishly skewed consolidation pattern. But in the Nasdaq 100 – and many other indices – the rally into the SEP high is way too out there to be labeled as part of a triangle pattern; that’s more likely a clearcut final 5th wave. So if we are dealing with a consolidation in progress here, it simply OUGHT to be 1 degree larger than the one that unfolded in February through June. 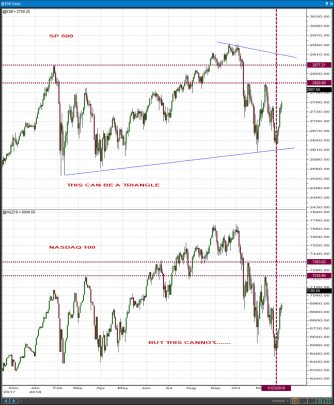 And if that is the case, our options right now aren’t really great – well from the long side and from a mid-term perspective I mean. Some wave ambiguity in 2010-2012 makes it unclear where the first 2nd wave pullback ended. If it ended in year 2010 near 1000 level, we are dealing with a 4th wave retreat of the entire rally pattern from down there. The initial low in that 4th wave would see prices slide into the 2200-2400 area and then rally back towards 2900-3000. If, however, wave 2 was a running correction then the entire five wave sequence from the credit crisis low is complete which means that the biggest correction in a decade is upon us. Frankly, given the surprising disappointment touch and feel of the slide from September to date, I favor that we’ll test 2200-2400 and then bounce. It would also make sense given the position in the Presidential cycle whereas the 3rd year of the presidency is the strongest for the stock market. But it doesn’t absolutely have to be that way and if we’ll see signs of a failed bottom building attempt at 2200-2400 then we’ll simply have to adjust. Right now we have the zone in mind both as short-term target and support but we’ll see what happens in the end.

Now back to the earlier, zoomed-in, daily chart of the SPX, yes the current bounce looks interesting: it started from a divergence situation between SPX and NASDAQ 100 and it resolves an oversold / positive momentum divergence in the market as a whole. But, the form of the bounce from the late October low alternates with the form of the drop from the late September high – flat vs zg-zag, respectively – making it highly probable we’re only seeing a bear market bounce here. In addition, none of the significant structural levels – 2820 / 2877 SPX,   7230 / 7363 Nasdaq – have been broken yet. And perhaps most importantly, the near-term impulsivity (sharp 1-2-3-4-5 rally in the lower time frames) is delivered with rather positive news which is what you’d expect at the tail-end of a corrective a-b-c up. So I am not saying this rally is nothing but I am saying afterall it may be nothing meaningful and it may in fact be nothing but a bull trap to set before we nose-dive into our 4th wave targets around 2430 and then 2198. Do not lose sight of the fact that a Brexit vote is being pushed to Westminster for December 11th and as it stands now it will likely be unsuccessful. Do not lose sight of the fact that the time-out on US / China tariffs may be just a tactic by the Trump administration to take a break on one front to be able to concentrate on more pressing issues – DT clearly wants to save Brexit and will likely address Brussels’ bullying, perhaps by threatening trade sanctions which he’d like to slap anyways given how abusive some countries inside the EU are in their trade relationship with the US. It does make a lot of strategic sense right now to give the Chinese some hope and get some space to maneuver to get the house back in order for the UK’s EU departure – which is also massively important for the US both politically and economically. And in fact, both philosophically and politically, these are important items for DT himself and his Administration. So all this confluence of mixed-bag fundamental and technical developments perfectly fit the bill for the current rally to be little more than a bluff, an upward correction that when terminated will be full retraced and then some.

To further illustrate my point as to how I can easily make a different picture on the current news situation I took a quick look at interest rates tonight – because interest rates were a hot topic earlier last week. Two things came to my attention: 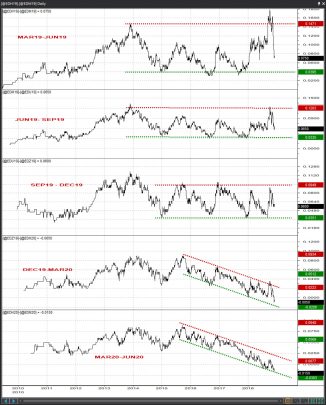 First off, the term structure of the ED – 3M Eurodollar contracts – is such that spreads going 1 year out are flat but spreads beyond that are clearly tiled bearish and negative. This suggests yield curve inversion. Ironically, FED’s comments last week would nothing but exacerbate that problem and this is not what you’d see if most of the stock market correction was behind us. With the spreads 12 and 15 M out negative and in downtrends you can tell the market thinks a bigger break may be put on the markets and the economy – a scenario which is totally compatible with our “bounce only” scenario in the SP500 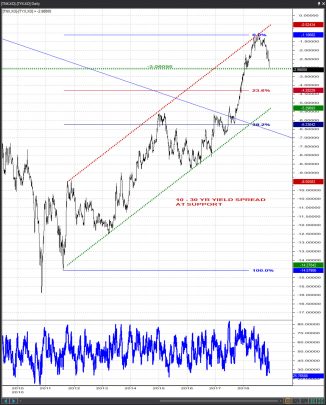 Secondly, the 10 – 30 Year spread continues its descent into our -43 bp target. A bounce is due but resistance at -20 / -17 bp should cap any corrections for now. A declining spread is a sign of falling yields and that doesn’t happen in a rising stock market. So both the EuroDollars and the long-end of the curve suggest more trouble ahead.

As a final point. I slipped and twisted my right hand wrist and I even struggled to put this piece together tonight so I am not in a position to update now the charts and the levels for the indices. I will do so tomorrow after my doc appointment. All of you, if you have particular questions regarding any of the indices and you need some urgent support, please get in touch with us by email or skype. We will respond as quick as we can. 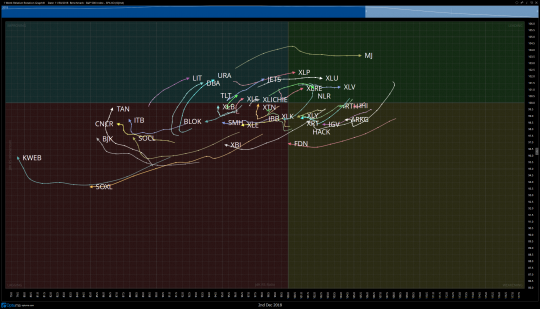 As I write this, the US and China have reached at least a temporary truce in the trade war that has negatively affected global markets. Saturday night, the US has agreed to postpone plans to increase tariffs on $200 million in Chinese goods. While we won’t know for sure how markets will react until the futures open Sunday night, I view this as the removal of one of a few obstacles, albeit temporarily, which could lead to further strength in the near term.

As a reminder, Wednesday is a market holiday, due to the passing of former President George H.W. Bush.

As Biotech starts to strengthen and turn up towards the improving quadrant in this week’s RRG I expect stocks like BLUE to outperform the overall market. As it coils up on both the intraday and daily timeframes forming a pennant, I think we get one more chance to get long from a bit lower in anticipation of a breakout. Implied volatility is a bit elevated so an ITM option makes the most sense here but OTM will work provided it works quickly. I would look to do a bull call spread in order to finance part of the trade targeting the 120 and 125 strike calls for December.

A chart of BPFH shows a wedge pattern falling down into the 5 year volume point of control which is a strong support level. With lower shadows being left over the past several weeks signaling buyer strength below, and a capitulatory large volume bar, I think anyone who wanted out of this stock has left the building. Options on this one are quite thin so stock is the trade here. Look for a quick $2 move higher in the coming weeks. 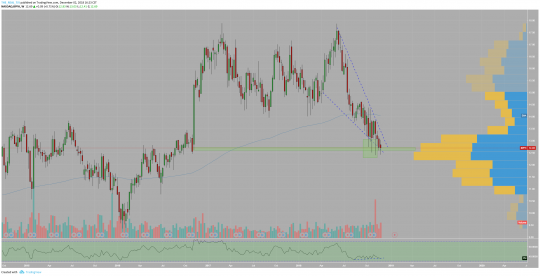 HAL is exposure to oil, which I think is a near must at these levels. Coming off the worst month for crude in over a decade, the commodity is trading into its 5 year point of control which will be a level of strong support. If you are able, you can trade crude futures. Giving futures trading advice as part of a weekly letter is not prudent so the next best thing is option exposure either via the USO or a stock that is highly correlated to crude itself. HAL has an “r” of .70 which means a high positive correlation. It has fallen to levels so far outside of the value area it is due for a snapback reversion to the mean. It was a tough call between HAL and SLB but I like the setup a touch better here. Depending upon your timeframe you can play for a move back towards the lower bound of the value area. I don’t see crude being this depressed for much longer. 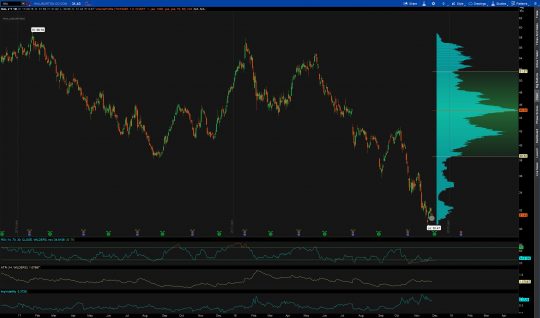 The strength in the solar stocks looks to continue as the TAN Solar ETF works its way into the improving quadrant this week. I think SEDG is one of the best setups in the group right here. Recently breaking out of a falling wedge, it came back in to retest the breakout area on Friday of last week, leaving a lower shadow indicating it may be ready to resume higher. Implied volatility is reasonable so options will be the play. I will be looking to add this early Monday for a trade back towards $47.

When this one breaks higher, it has a lot of room to the upside. This past Friday IQ put in a very bullish engulfing pattern on considerable volume. If risk is bought coming into the early part of this week, look for the likes of IQ and HUYA to outperform. This is one I don’t want to miss so I may play it multiple times, if needed, via options.